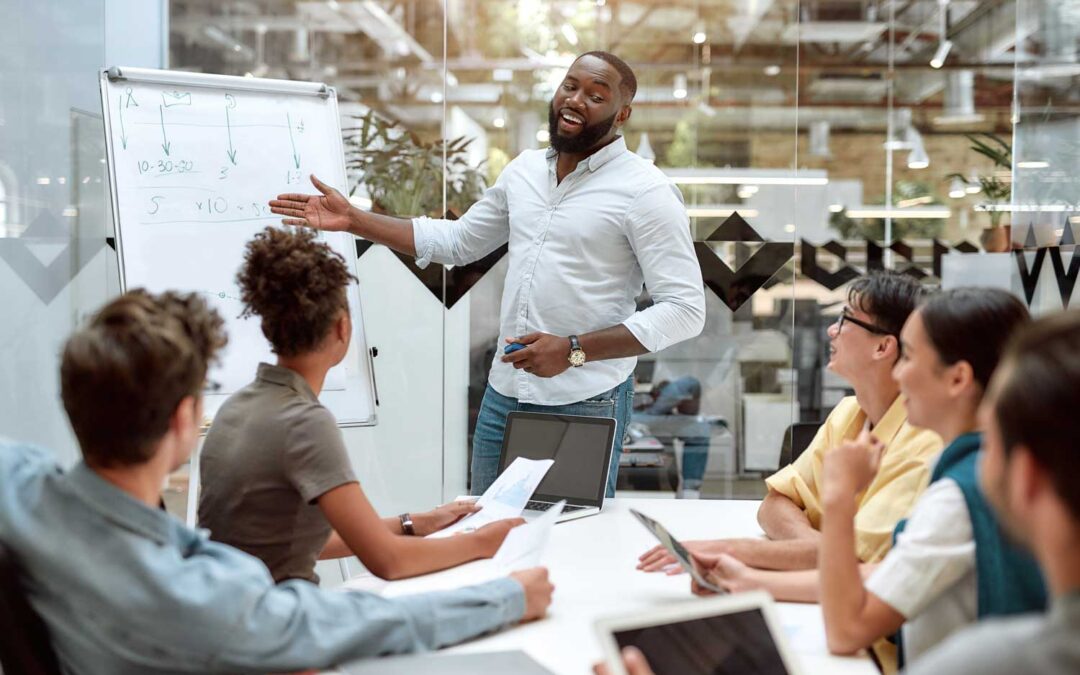 Learning to lead can be a matter of jumping in and trying it out. But there needs to be a safe environment for trial-and-error and experimentation – a space where first time leaders aren’t afraid to make mistakes.

One manufacturer created an innovative peer-to-peer coaching program that organizes non-managers into teams in which members take turns leading. It’s proving to be a sandbox for leadership development.

The teams hold monthly meetings to manage the work of their specific department –collaborating on solutions and working out business issues and organizational challenges.

“As the program progresses, the participants slowly start to take more of a ‘front and center’ role as the facilitator slowly moves to the background.”

Periodically members rotate, so each member eventually steps in as leader.

It’s effective in improving technical skills to get the department-specific work done, but longer term, new leaders have emerged. Early on, three team members were promoted to manager.

Stepping into the role of team leader is a major learning experience for personnel that wants to advance.

The challenge for members is to move a team that doesn’t report to you. Throughout the process, the leaders must bring a sense of community to the group and build a collective culture.

The teams are organized to bring together differently skilled players. Silos are broken down as engineers engage with buyers and others from different areas. Each member shares accountability, decision quality, planning and alignment, and instilling trust.

In this sandbox, team meetings give people have a chance to try new skills, learn from mistakes, and compare methods. The members coach, collaborate, and learn from each other. And it’s the leader’s job is to facilitate this.

One manager described it as being the “magnet” that brings the team together: “You have to make something that people want to get behind. And no matter where you are, that’s what leadership is about.”

How it came about

A manager at one of our client businesses wanted to make feedback for development more important in the organization.

With the peer-to-peer program we helped establish, he committed to giving his team regular feedback, so they never have to wonder about how they’re performing or what their performance gaps are.

“Through our guidance, we developed a nine-month program that used one of our seasoned coaches to introduce and teach the process,” said Donna Warrick, Jamesson Solutions principal. “As the program progresses, the participants slowly start to take more of a ‘front and center’ role as the facilitator slowly moves to the background.”

The project started by putting more structure in place for people, after identifying talent gaps. Peer-to-peer is set up as a protected place where everyone could learn and develop in their department and within the company.

Teams meet monthly. The leader convenes the meeting and does a round robin check-in with each member to warm up the group and to find out if there are any major issues and, generally, what the status is of all work.

Next, the team is asked to submit any problematic issues. This could be negotiations that get snagged, personnel concerns, boss problems, vendors needed, anything that affects the work of the department. Each person puts their issues on sticky notes to be posted in four categories: wins, best practices, challenges, and help wanted. Team members decide how to prioritize which to take on and which to table. The assigned leader facilitates this, but it’s also collaborative.

Next, issues are worked out by going around the room with each member asking open-ended Socratic questions of the member who brought the issue. There’s a round of suggestions from each member with a debrief from the leader and an action plan for follow up review.

Peer-to-peer is built on giving and receiving honest feedback through group conversations that is too often missing in organizations.

Peer-to-peer coaching is both structured and, at the same time, a little wild. It’s an acid test for revealing strong leaders who don’t always appear where you expect them to.

We’ve seen newly emerged leaders move on from the department for promotions, while others took their turn with this and realized they wanted to do something else.

We’ve learned that under severe stress – such as the pandemic – people side-track training. So, make training mandatory. Don’t allow it to be de-prioritized. Making the meetings mandatory isn’t about enforcing people to attend as much as being about protecting the value of the engagement.

Virtually or face-to-face, it became clear that the simple practice of gathering teams for conversations is effective for improving performance and developing leaders.

The peer-to-peer approach enhances on-the-job learning with greater interaction, interpersonal communication and feedback. And it’s a scenario in which leadership can be practiced, tested, and developed, where it’s okay to make mistakes.

One manager described the process as “learning to be a student to what is happening, and then having the courage to try new things and see how it works.”

An innovative new program lets emerging leaders try out their skills while learning to give and receive feedback on the job. ... See MoreSee Less

Peer-to-peer – Learning to lead can be a matter of jumping in and trying it out. But there needs to be a safe environment for trial-and-error.
View on Facebook
· Share

Organizational development increases engagement and improves retention, and business simulations are proven tools for learning by doing, without any risk to the company.jamessonsolutions.com/take-your-teams-back-to-school/ ... See MoreSee Less

Take your teams back to school

Take your teams back to school by wordpressAdmin | Aug 19, 2022 | Simulations, Uncategorized We never lose the feeling of back-to-school time, do we? Even if you don’t have kids or your kids have al...
View on Facebook
· Share